Return to Barnardo’s – of the Wrong Prop

Daleks Two and Four after returning from Barnardo’s

To record The Dalek Invasion of Earth using as many props as possible, the BBC had borrowed back the two Daleks donated to Dr Barnardo’s Children’s home in February 1964. Barnardo’s had had them for six months, where after the BBC used these props during the Autumn. Recording of the second Dalek serial finished on 23rd October 1964 and the BBC had an agreement to return the props.

The two props which had originally been donated to the Children’s charity had been Dalek Two and Dalek Four, both of which had been in their typical silver/grey livery at the time they were returned to the Doctor Who production team. They were easily identifiable during this story because they were the only two props which had black eye-balls, and a noticeable amount of other damage to neck rings and gunboxes, as testament to the fact they had been well used by Barnardo’s.

However, as required by the storyline (and as a useful mask for some of the damage and the repairs which had been carried out) Dalek Two had been painted up as the Black Dalek. Therefore when it came to return two normal silver props to Barnardo’s, it was instead Dalek Three which was dispatched to the Charity, rather than the black-painted Dalek Two1. It was a logical decision after all – Two silver Daleks had been donated originally, and two silver Daleks would therefore be returned – it just wasn’t the same two. This also allowed the newly-created rank of “Black Dalek” to be used as part of the publicity machine for the television adventure. 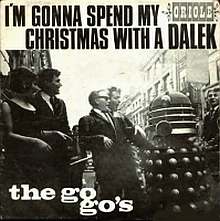 Daleks in London on the GoGos Cover

The excitement surrounding the Daleks started to gather pace towards the end of 1964. Small cameos began to appear, such as when two Daleks showed up on the sitcom A World of His Own written by Terry Nation’s old cohort Dave Freeman and starring Roy Kinnear, which was transmitted on Friday 21th August.

By the winter of 1964, the Daleks were everywhere. One notable appearance of the Black Dalek was on the cover of a pop record. A group called The Go-Go’s recorded their song I’m Gonna Spend a Christmas with a Dalek, and publicity photos for this were taken in late November 1964.

For the occasion, Dalek Two and Dalek Six were photographed outside Oriole Studios in New Bond Street in London with members of the group accompanying them, and one such photo was used on the cover.  Dalek Six‘s busy schedule was taking its toll, and patched-up gunbox were in evidence, along with severe denting to the lower collar. The eye-disc was still broken from the final episode of The Dalek Invasion of Earth.

Another photo-call around the same time was with their creator Terry Nation. This again featured Dalek Two and Dalek Six, and an interview with him was published in the Radio Times of the week beginning 5th December. 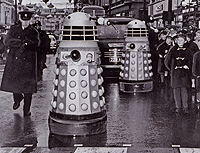 Since the broadcast of The Dalek Invasion of Earth began in late November and comprised six episodes, it perfectly coincided with the build-up to Christmas, and at the time the country was going wild for all things related to the Daleks. Further publicity events were arranged for the Dalek props, including an appearance in Cardiff on the afternoon of Saturday 12th December 1964, with episode four being broadcast that same evening.

That same day, the Daleks appeared on television in the evening performing a dance routine with the George Mitchell Minstrels on The Black and White Minstrel Show.

Dalek props in colour in the Radio Times

The Radio Times had a lot of coverage of the Daleks around this time. There had been a full preview of their new TV adventure, and Daleks were featured on the cover in the issue for the week of November 21st – being represented prominently by Dalek Five in front of the Lions of Trafalgar Square during location filming, and the same prop inset emerging from the Thames. The aforementioned Terry Nation interview followed a couple of weeks later, and finally the Christmas issue itself included an eight-page spoof of Alice in Wonderland featuring … guess which Doctor Who monster!

Dalek Two at the Girls and Boys Exhibition

The parody told the tale of a young girl with a different name – Barbara in Wonderland – and she becomes lost in the BBC studios and has a variety of escapades which included drinking tea with two Daleks and the Doctor. The images from this feature are important as they are very rare colour photographs of the props in the Dalek Invasion of Earth guise; being Dalek Two and Dalek Six once again. 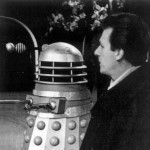 Ray Cusick visits the Boys and Girls Exhibition at Olympia. Click for a larger view.

The Daily Mail was also quick to pounce on the draw of the Daleks for their annual Boys and Girls Exhibition. The event featured over 100 stands of fun and education for children. It opened on 28th December 1964 at Olympia and ran until 9th January.

Daleks Six’s damage at the Girls and Boys Exhibition

For the event, two props were leant by the BBC. These were Dalek Two, and Dalek Six. The latter previously had a blob of silver paint on the inside of the arm-box which had been present since recording, but after a minor refurb saw the eye-disc repaired and a light re-attached, this arm-untidyness was replaced by a neat rectangular patch. During its time at this exhibition, Dalek Six sustained considerable damage to its lower collar. Ray Cusick also visited the exhibition during it run. Various boys from ‘The Boys Brigade’, whom also had an exhibit at the show, manned the Daleks. Dalek Two would later appear on the cover of the magazine of The Boys Brigade – Stedfast.

Whilst the four Daleks held by the BBC continued in their official duties, those that had been returned to Barnardo’s were similarly put to all sorts of uses as Dalekmania swept the country during Christmas.

The Access Equipment Christmas Party in Hemel Hempstead in 1964 was graced by the presence of the two Barnardo’s props: Dalek Three and Dalek Four. An unsurprising connection perhaps, since the company provided a variety of disabled equipment. 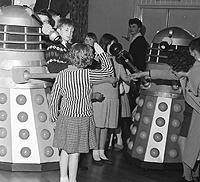 Both Daleks were refurbished after their TV appearance and, in keeping with the policy of returning the props as they were lent, their large fenders had been removed. However, instead of returning them to the small type of castors in the first Dalek serial, they were given a slightly larger type, resulting in the props’ fenders being at least two inches off the ground, and showing the wheels beneath.

By this point Dalek Three had sustained a broken eye disc and chipped neck rings, whilst Dalek Four‘s arm-box veneer has been completely torn off, and the gunbox remains un-repaired as it did in its last screen appearance. 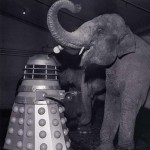 These two props would continue to make numerous appearances relating to the children’s charity but, as with many aspects of Dalek history, their fate is shrouded in mystery. Their final locations are unknown although one young boy, who grew up in the East End of London, recalled discovering one of the two props in the grounds of the recently closed Stepney Home. For a short time after the closure of the home in 1969 the prop was a source of amusement to the children who would see it every day until, one day it disappeared… 2

But even before the children of Britain had opened their presents on Christmas day, Terry Nation had been commissioned on the 16th December to write a third Dalek serial.

The Dead Dalek One in The Space Museum 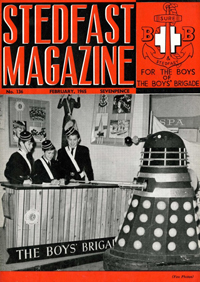 By way of a teaser for the proposed “Dalek Three”, a Dalek appearance was written into the serial that would precede it, entitled The Space Museum. As indicated by the title, the setting of this story allowed for a collection of space craft and objects from all manner of races and civilizations. A dead Dalek casing was written in, which the Doctor would later use as a hiding place. It would feature the Doctor popping his head out from inside.

The hinge (left) and the holes after removal (right)

And so, four months after the flurry of Christmas activity, Dalek One was nominated to play the museum Dalek and rolled out of storage. It was modified accordingly to include a hinge at the top of the neck so that the dome would pivot up and the functional inside of the dome was disguised with a metal plate. As well as removing the prop’s enlarged Dalek Invasion of Earth fender, this prop had had new lights fitted. The original spherical bulb covers were frequently knocked off, but the new type which debut in The Space Museum had an inverted U-shape that allowed stronger attachment to the dome around the rim. 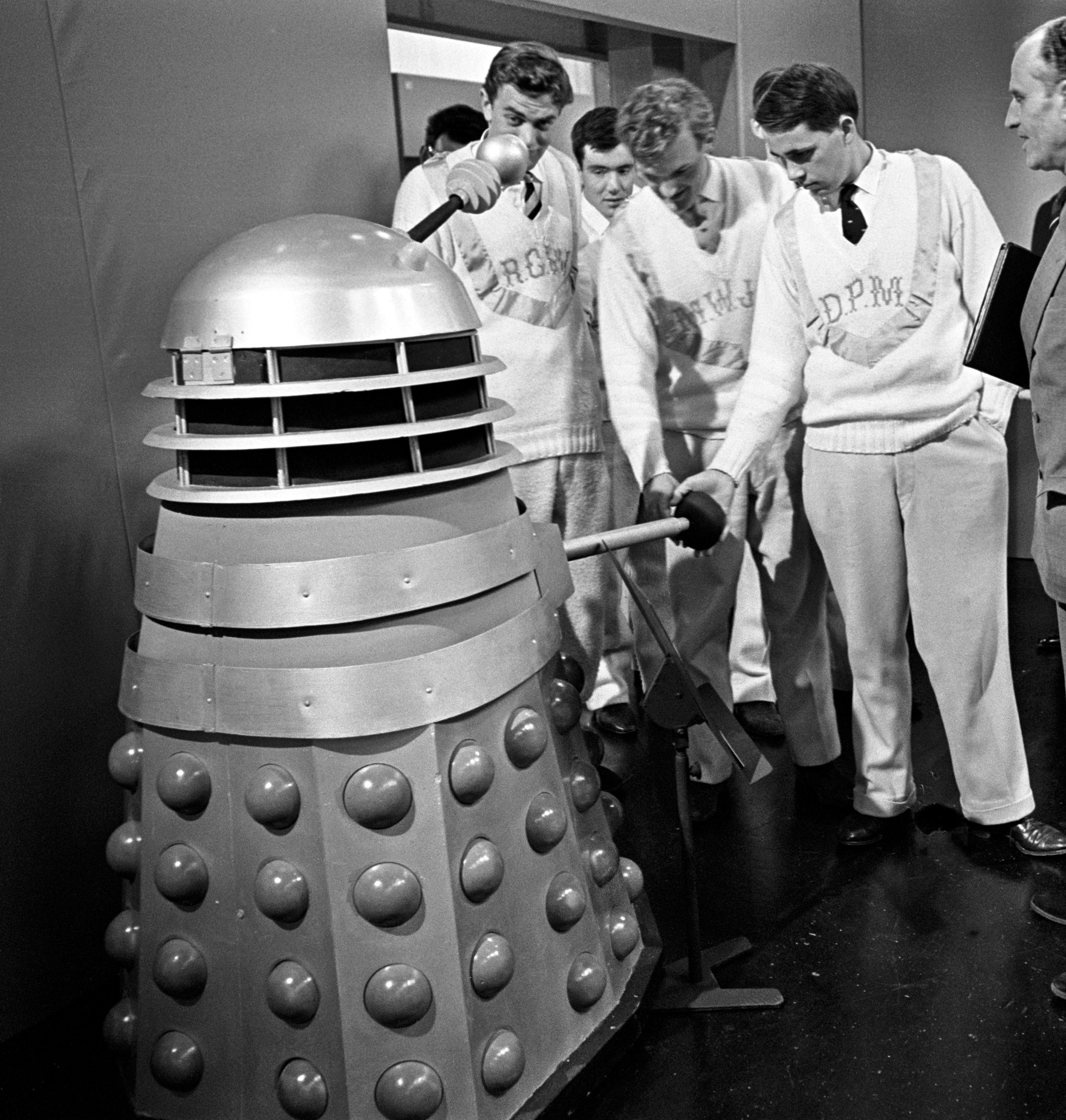 The Cambridge Boat Crew meet Dalek One. Click for a larger view.

The first scene with this prop was recorded on 2nd April 1965 and the second was on 9th April. During the day of the 2nd, the Cambridge University Boat crew took a break from training as guests of the BBC. They were due to be involved in the annual race with Oxford University the next day but took time out to visit the studio where The Space Museum was being taped. The lucky team got a close up view of Dalek One, however, they were not so lucky the next day when Oxford won the race.

This would be the final appearance of a Dalek in its original guise and indeed by this date it was already the sole surviving prop to remain in this form (excluding the departed Barnardo’s props), as its brethren had already had modification work carried out…

A more substantial segue was then included in episode four of The Space Museum, whereby the viewer at home was privy to the goings-on of a Dalek control room somewhere, in which a drone communicates with his commander and their plan is revealed – to hunt the TARDIS through time and space.

This same Dalek One was used for this scene after it had undergone refurbishment at Shawcraft. The full changes will be discussed on a later page, but notable in this second cameo is that the hinge at the back of the head has been removed, leaving four very obvious holes in the rear of the dome.

However, away from the BBC television studios, another production entirely had been started. By the time Terry Nation’s third Dalek serial was being rehearsed, two film producers called Joe Vegoda and Milton Subotsky had secured the rights to produce a Doctor Who feature film. Contracts had been signed before Christmas three months earlier and the work on the film entitled Dr Who and the Daleks would prove to have a lasting legacy.

Next Page: The ‘Dr. Who and the Daleks’ Movie