The 2021 New Year Special, Revolution of the Daleks, had seen a new design of Dalek that, as is typical when new designs are revealed, split Dalek fans into those who liked it and those who didn’t.

But the ‘Security Drone’ Dalek wouldn’t be the only new design of the year. Taking everyone by surprise in May a new Dalek story was announced – The Suburban Terror. Scripted and produced by Andy Dobson and his team, the plot took one of the grizzlier elements from Revelation of the Daleks and expanded it and made it more family friendly.

In this exciting adventure, the Daleks were already secretly on Earth and creating new Daleks from humans. Instead of growing the human into the usual Dalek shell, as was seen in Revelation of the Daleks, this time the the alien casing was designed with the full human form in mind. The casing not only allowed full movement in all environments (meaning stairs did not need extra motive power) but it also allowed the captured human to leave the shell and complete further nefarious tasks. 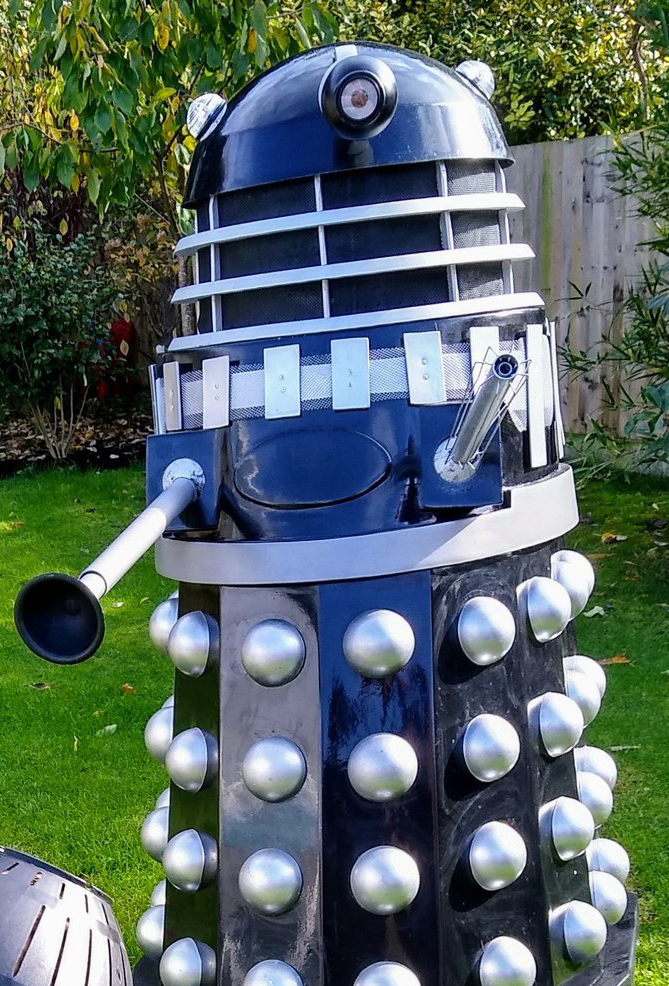 The Colin One Prop

Just two Dalek props were needed for the story’s filming. The first didn’t come from BBC stock, but was in fact a replica Dalek based on the ‘Necros’ mould Daleks from 1984. This was a deliberate move to further tie the Daleks to Revelation of the Daleks. However, as the prop was the leader Dalek its livery deviated from the white and gold of Davros’ new breed. Instead, it was finished in the black and silver seen on the Supreme Dalek (N2) in Remembrance of the Daleks.

With the Daleks attempting to infiltrate Earth from within, instead of giving the leader Dalek a grand title that would make humans suspicious, it was referred to as ‘Colin the House Dalek’. We will refer to this Dalek as Colin One (or C1).

The second Dalek required was the new design. Instead using the usual angular and difficult to build design, the entire shape was perfected and streamlined into a six sided “box” style form into which holes were cut in the side and top to allow the operator to place his arms and head through. As with the older Dalek props, the underside was left open to allow the operator to propel the prop around its terrain also using colourful rubber footwear to aid the movement.

The Rory One Prop

The casing was given the same livery as Colin One, that being mainly black with silver for the new style flat discs that were arranged across the front side.

To continue the theme of infiltration from within, the dome, gun and arm were based on household utensils and were easily held by the operator and gave a full range of movement. The deceptive nature of the gun’s design meant that un-converted humans would not detect its true use.

The decision was also made to arrange the gun and arm the opposite way around to the usual positions. Although rare, this arrangement had been seen in Death to the Daleks and Asylum of the Daleks. In plot terms, this accounted for the human condition of left or right handedness to be allowed for.

We will refer to this Dalek as Rory One (or R1).

The usual Dalek operators, Barnaby Edwards and Nicholas Pegg, were overlooked for this new story and instead newcomer, Rory, took over the role with brilliant results. The Daleks had never looked so mobile and frightening in a range of internal and external locations.

The plot of The Suburban Terror ended on a cliff-hanger when the Rory One Dalek was seen abandoned in the corner of a bedroom with its operator asleep in a nearby bed.

The new look Dalek wowed nearly all the fans and #dalek was soon trending on twitter in the hours after its reveal. Time will tell if we will get to see it again in another adventure.

The BBC’s own Dalek props are often seen out and about making public appearances and Colin One and Rory One‘s operator made one such appearance on Twitter for ‘Stand Up to Cancer’ by making a cake in the style of ‘Bake Off’. The producer of the new Dalek episode and this public appearance (@DobbersW) highly recommends giving a donation to the cancer charity of your choice.