The Power of the Daleks

The Destiny Of Dr Who 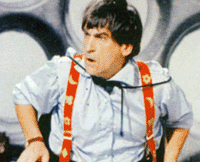 During the summer of 1966 the Doctor Who production team were replacing their lead actor. Anxious that the public would not take to William Hartnell’s replacement, it was felt that some continuity would be maintained by having the new Doctor confront his old enemy – The Daleks. Despite over-exposure to the creatures during the interminable The Daleks Master Plan, the recent motion picture had rekindled a little interest. Terry Nation was busy on other projects and so David Whitaker was contracted in July to write a Dalek story entitled The Destiny of Dr Who.

Production was due to start at the end of September and, as usual, investigations were made as to how many Dalek props were available and in what condition. 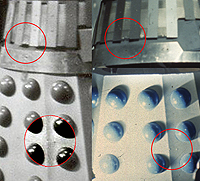 The “Stunt Prop” Dalek Seven with two of its unique identifiers marked, in The Chase (left) and Power (right)

One myth which Dalek history has never managed to shake off is the mistaken idea that movie props were used as TV hero props. Confusion caused by Power of the Daleks fuels this myth because this serial marks the first time that a hero prop appears on TV with all the movie-Dalek characteristics (i.e. flat-top gunboxes, misaligned hemis, etc). The prop in question is erroneously referred to by some prop historians as a “converted move Dalek” however there never was a “movie-conversion”. The prop in Power of the Daleks which has movie-characteristics is simply the “stunt Dalek” seen in The Chase. And, as proven proven beyond doubt in analysis of The Chase’s props, this “stunt Dalek” was built brand new for television in April 1965, albeit using moulds created for the first movie. It can therefore be stated with certainty that despite the two movie productions adding many props to the Dalek family, none of them were adopted by the TV show at this stage or any other. 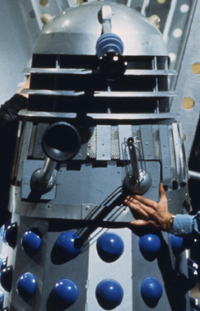 The Dalek Six shoulder section retained its rectangular patch on the arm-box, paired with the skirt of Dalek Five

The five casings in circulation at the time of Patrick Troughton’s debut were: the original Dalek One and Dalek Two built for The Dead Planet, Dalek Five and Dalek Six built for The Dalek Invasion of Earth, plus the the “stunt prop” Dalek Seven mentioned above.

By this stage, the top halves of Dalek Five and Dalek Six had been swapped over and it was therefore a composite which appeared on screen. The prop which was ultimately taken to the studio was made up of the top half of Dalek Six (with its distinctive gun-ball patch) and the skirt of Dalek Five (with its large lower hemisphere gap. The two halves would never again be united correctly, so to acknowledge this permanent change, whilst taking into consideration the upper section is always the most distinctive half of a prop the designation for this prop hereafter will be Dalek Six-5.

The Dalek made from the opposing two halves, being the top of Dalek Five and the skirt of Dalek Six remained unused, and stayed at the workshop of Shawcraft. To give the production four props, in its place Dalek Seven was brought in to act as a hero prop for the first time. For this purpose it was fully repaired after the damage sustained in The Chase, and was provided with the internal paraphernalia required for normal operation.

The four props destined for the studio were refurbished and fitted with a variety of replacement appendages.

TV guns originally had a set of three perspex octagons upon which were painted four faux spokes. The film Daleks had been given simpler weapons with an unsupported set of rails. The new guns for Power were the simpler design akin to the film props, with no octagonal sections along the length, and these were fitted to all four Daleks.

Dalek Two’s new gun had an unusual quirk whereby the shaft was extruded from the ball-joint, producing a gap before the rails. As with the others, the refurbishment of this prop included a new coat of paint, but it wasn’t enough to disguise the thick paint run which had been present on this prop since it had been repainted for The Dalek Invasion of Earth. Another helpful identifier.

The four props also had their eyes rebuilt using a variety of existing and new components. 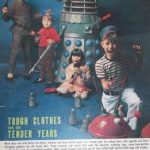 The shaft of the original eye-stalks tapered to a narrow end, with a tube slid over the top of the narrow end, on which the discs were mounted. The new eyes were constructed in the manner as the movie Daleks, whereby the tube holding the discs was made of perspex and flush with the rest of the stalk. The eye-balls used were a variety of old and new and the working lens aperture was fitted to Dalek One.

Internal refurbishments had also taken place. Handles were fitted inside the skirts prior to recording, resulting in visible bolts appearing on the outside of the skirts. Dalek Six-5 had three bolts clearly visible, whereas Dalek One only had two bolts apparent.

Dalek Seven already had handles affixed to the inside of the skirt (which would have been necessary when ‘walking’ the prop across Camber Sands when filming for The Chase) but these can be seen lower than on the other props.

Production was delayed by a week so that Dennis Spooner could shorten David Whitaker’s over-long scripts and also re-write the Doctor’s character which had not been deemed satisfactory after the initial drafts. The cast, crew and the four Daleks converged on Riverside Studio 1 for episode one on Friday Oct 22nd. 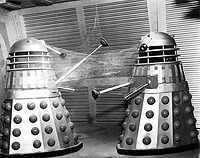 By the time the Daleks reached the studio, their components were now jumbled around quite considerably. For example, the very first scenes in the Dalek capsule show that the neck section of Dalek Two with its distinctive block-repair has been placed on the shoulders and skirt of Dalek Seven. And conversely, Dalek Two‘s shoulders and skirt were paired up with Dalek Seven‘s movie-style neck and dome.

Episode Two recorded on 29th October required only a one de-activated Dalek which was then charged with power, before it exterminated Resno and had its weapon confiscated. Dalek One was used for this, and the removal of the gun took its toll on the front of the gunboxes where the fixing had to be dismantled.

Episode Three recorded on Nov 5th 1966 again used a disarmed Dalek One, and then in the final scenes of the episode it was joined by other props. 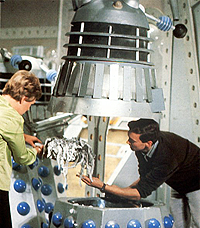 Dalek One on the assembly line

The climax of episode four, recorded on 12th November, featured the legendary production-line sequence. For this set-up, Dalek One had its arm removed in addition to the gun, and the head drilled with holes that allowed clamps to hold the entire upper half of the prop in the air, to then be lowered onto the skirt in the assembly process. The inside of the skirt was lined with silver foil and the top edge painted silver to conceal the nature of its construction. The large, circular marks left by the clamps are visible throughout the rest of the episode. The prop used in rehearsals for delivering the Dalek mutant into the skirt section was Dalek Two, however for recording it was Dalek Seven that was fitted with the net containing the blob. The four props gathered in the capsule for the cliff-hanger, in front of an army of photographic blow-ups.

An FX prop for episode six

Part five on 19th November saw the army biding its time, and the final instalment recorded on 26th November was unusually shot on 35mm film rather than videotape to ease the complex process of editing the final battle. A number of FX dummies were constructed that comprised collapsible sections and hero components. 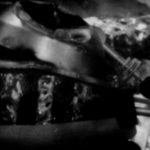 A close up of the detailed destroyed Dalek. Click for a larger view.

Model work was also employed to show the Dalek production line and in the final scenes of destruction.

The last shot of the story saw a damaged Dalek standing next to the TARDIS as it departs. The Dalek feebly lifts its eye suggesting there was still life there. Whereas the FX Dalek sections earlier in the story had been light weight and poorly detailed, this Dalek needed a more substantial and detailed upper section for the lingering close up shot. The shoulders included crumpled slats and mesh and an eye was temporarily removed from one of the main Daleks and fitted to the dented dome section. The whole upper section stood on the of the skirt of Dalek One.

At the beginning of February 1967 an amateur film-maker called G. Irwin was given access to the workshop at Shawcraft and allowed to shoot footage of the props that were both in storage and under construction. The creations filmed included the giant crab monsters that were under construction for The Macra Terror which was due to begin on 15th February. 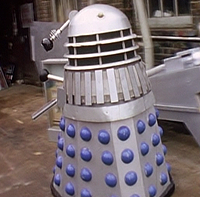 The prop wasn’t in Power of the Daleks

The star of the film is the Dalek prop which was kept at the Shawcraft workshop and remained unused in Power of the Daleks. It consists of the top of Dalek Five and the skirt of Dalek Six.

Plan, but not all of them. It has been fitted with a new, simpler gun, and is has broad-rimmed lights as per all the other props used in Power of the Daleks. It retained its original eye-stalk from Dalek Invasion of Earth, with its discs looking considerably worse for wear.

If the other props’ eyes were in the same state, then it would clearly explain the need to replace them all in the recent TV serial.

The Daleks next appearance came in an advert made by Walls Ice Cream to promote their new-shaped Sky Ray ice lolly. Despite lasting only five seconds, this footage joins the Follow That Dalek material in being the only known colour film of the Daleks in this guise.

In a short sequence set inside a charmingly-cheap TARDIS, a faux-Troughton Doctor (conveniently hiding his face in fear) was menaced by two Daleks which burst through the doors of the time machine.

Dalek One in the Wall’s Sky Ray Advert. Click image to see a video

The props used for this advert were Dalek One and a new mix of Dalek Seven-5. Very little changes had been made to the props with Dalek Seven-5 still sporting Dalek Two’s neck cage with the block repair and Dalek One still retained a hole in the top of its dome from the production line scene and the damage to its gun box from Power of the Daleks. Several slats were now broken on both props and interestingly Dalek One’s shoulders had been sprayed completely silver giving the prop a strange monotone look.

It would not be long before the Daleks were called into action once again, but this time there was a motive behind it. Their own creator was plotting for them a “final end”…

Next Page: The Evil of the Daleks