Day of the Daleks

The Return of the Daleks 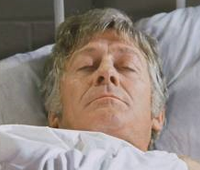 Four years had passed since the Daleks had last appeared in Doctor Who and the series had changed dramatically. The series had a new lead actor; Jon Pertwee, along with a new companion and a new family of supporting cast to assist the Doctor during Earth exile – a concept devised as part of a revamped format. The show was now made and broadcast in colour and a new producer was at the helm. Old monsters such as Daleks and Cybermen had been deemed Persona non grata as producer Barry Letts and script editor Terrence Dicks looked to make their own mark on the show.

The exclusion of old enemies would be addressed however when an inquiry in the spring of 1971 by BBC Managing Director Huw Wheldon lead Letts and Dicks to consider the return of the Daleks. Letts had previously been reluctant to include the old foes but was persuaded to meet their creator Terry Nation, and whilst Nation himself was too busy to write the scripts he was willing for another author to write for his creations so long as he had approval, and permission was given on 22nd April . 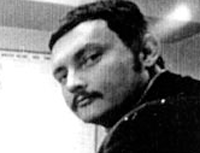 Letts and Dicks first approached Robert Sloman to devise the proposed Dalek story as a climax to the upcoming Season Nine, and a storyline entitled The Daleks in London was produced. However Letts and Dicks became worried that the opening of the season needed something bigger to hook viewers, and so the Daleks were brought forward to be included in a Louis Marks’ story about time-traveling guerrillas which was already well in advance having been commissioned in January of 1971. This story eventually became Day of the Daleks.

Daleks in Colour. On the Small Screen!

The director appointed to the serial was Paul Bernard, and the scripts required him to depict a Dalek army for the story’s big climax.
Around the time that contracts were issued to the human actors in mid-August and early September 1971, the availability of the show’s real stars was being investigated – the Daleks.

The remaining props which were therefore brought from storage were:The stunt-prop built for The Chase with its movie-type characteristics which was Dalek Seven (now fitted with a TV neck), a composite made up of one skirts and the alternate top half built for The Dalek Invasion of Earth termed Dalek Six-5, and lastly the lone skirt of Dalek Two and shoulders of Dalek One. 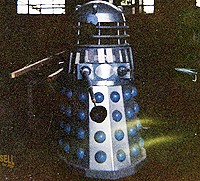 Daleks about to be sprayed for Day of the Daleks. Photo – James Russell

The props at this time were still in their silver and blue livery as seen in Evil of the Daleks. In early September of 1971 the props were given some heavy refurbishment for the forthcoming TV appearance. All three necks were given new mesh of a coarser style and the cages were replaced. These retained the Shawcraft style of ‘clover’ rods but these were of a smaller diameter, therefore overall the rods appeared thinner. The eye mechanisms were adjusted, including new eyestalks and eyeballs (that now had a pupil as standard), which had the unfortunate effect of leaving visible screws around the pivot hole. The lights were changed again, this time to car side-lights very often seen on the “Mini” car of the time and the shoulders of all three Daleks were tidied with new mesh which was also of a coarser type than previously used. The shoulders of Dalek One also had some internal work carried out on its highlighted by two extra bolts which appeared either side of the oval between the boxes, which itself was new addition to all three props. 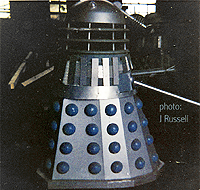 Daleks about to be sprayed for Day of the Daleks. Photo – James Russell

All three surviving skirts had had their fenders enlarged, and metal plates were added around the edges to protect the easily damaged wood. Bigger castors were also added, meaning the props stood slightly taller than previously. For their studio work, the excessive ground clearance would be hidden by thin black plastic film akin to the rubber movie style fenders.

Dalek Seven-2 was given a new gold and black livery and acted as the lead Dalek, whilst the other two Daleks were painted in a dark metallic grey and black. 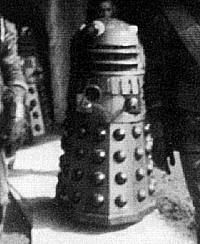 Daleks on location at Bull’s Bridge

Location filming began on 14th September 1971 at Dropmore Park in Burnham which was acting as Auderly House. The climatic battle scenes were filmed here supposedly featuring an army of Daleks attacking the peace conference taking place in the House. However as only three props were assembled the army looked a little thin on the ground, which was not helped by the director repeatedly using shots of all three Daleks, giving the impression that there were many gold leaders flanked by just two subordinates.

When shooting moved to Bull’s Bridge two days later, the props had to run on boards placed over the uneven surface, and the lack of the black plastic on the fender would have aided ground clearance. The filmed shots mainly show them from the lower skirt upwards, but there is at least one instance of a full shot showing the uncovered fender. 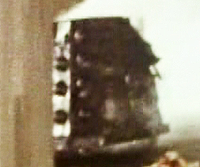 An FX skirt is destroyed

Filming moved to Harvey House, Green Dragon Lane in Brentford where the attack on the Daleks’ headquarters took place. These scenes firstly utilised Dalek Six-7 attacking the guerrillas and then a shot was required featuring a destroyed Dalek.

An FX prop was created for the effect and was a hastily built lightweight skirt section that had broken sections and randomly placed hemispheres. Unusually for an FX prop, castors were still attached to the underside.

In Studio and a Sneak Peek

The three Daleks in studio

In studio work, beginning on 4th October, the Daleks were used sparingly and even when on screen were very static. Two new voice artistes were employed and gave the Daleks a very dull and monotone speech pattern. Bernard had disliked the voices from the 1960’s and so voice modulation was done in studio rather than using the Radiophonic Workshop. Overall the whole impression the Daleks gave was very different to the agitated and angry Daleks of the sixties tales.

Dalek One-5s light is patched up

During the Magnotron scenes in the Dalek Control Centre it becomes clear that Dalek One-5 had sustained damage to one of its dome lights. In one of the crudest repairs ever seen to a Dalek prop it was very hastily patched up with two bits of black insulation tape placed over the light in a basic cross shape to hold it on! The repair can also be seen at the climax of episode two when Dalek One-5 appears in the tunnels. 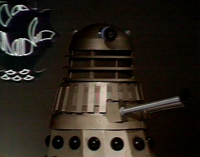 Just six days after filming was completed in October 1971, viewers were treated to a surprise appearance of the new look props prior to transmission of the serial the following January. On October 25th Blue Peter included a brief promotion for Doctor Who and the three props appeared in studio. Viewers were encouraged to write in to increase the chance of the Daleks appearing in the upcoming season.

Dalek Six-7 was already sporting a damaged gun and missing eye disc which can be seen half broken in the location footage and Dalek Seven-2 already had two different styles lights indicating one had been damaged since filming finished. 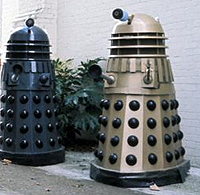 While filming The Curse of Peladon at Ealing in December, Jon Pertwee took time out for a photo call featuring two Ogrons and two Daleks. These pictures featured Dalek Seven-2 and Dalek One-5 and would be used for publicity.

A few days later, on 21st December, both Dalek Seven-2 and Dalek One-5 again appeared together at a photo call at the London Planetarium. Former companion Peter Purves interviewed Pertwee and Letts as part of the Planetarium’s ‘Young Observers’ lectures. Other monsters, including Axons and Sea Devils, were also in attandance. 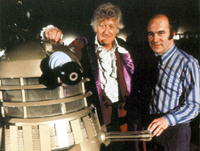 Pertwee and Letts at the London Planetarium

In the days since the Ealing photo call both props were starting to look damaged. The plastic film, running round the fender of Dalek Seven-2, had in the main been ripped away leaving some small areas with torn plastic hanging limply from it. Several hemispheres were also chipped revealing the original blue colour. Dalek One-5‘s eye discs were damaged with some missing altogether.

On 31st December, Jon Pertwee again took part in a publicity photo call with the same two props outside BBC Television Centre. The gold Dalek Seven-2 was in its same ‘Planetarium’ condition but the full extent of Dalek One-5‘s damage was now clear with not only its eye discs either broken or missing but slats were also missing from the shoulders and the whole casing was generally chipped and scratched.

In the space of just ten days the condition of the props had seriously deteriorated, more than likely due to mishandling on their trips around the country. It was a continual problem for them but their own popularity meant that people all over the country wished to see them, meaning damage would happen on a regular basis. 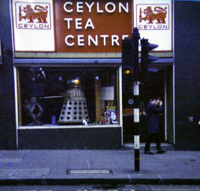 The Radio Times promoted the return of the monsters with a “Win a Dalek” competition during the transmission of the serial (beginning on 1st January, 1972) with the winners receiving a “Mark 7” remote controlled Dalek. 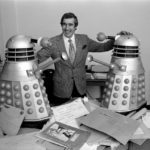 Terry Nation with the prize Daleks – Click for a larger view.

There was also an exhibition of the winning entries at the Ceylon Tea Centre in Regents Street, London in the last week of March and first week of April. The gold Dalek Seven-2 was placed in the window of the centre for the duration of the display and was sporting some new castor covering tidying up its appearance somewhat.

1973 would see the tenth anniversary of Doctor Who and what better way to celebrate than to bring back the Daleks, and written for by their original creator, Terry Nation.

Next Page: Frontier In Space